Guides / Moving to the United States: The Essential Guide

Moving to the United States: The Essential Guide Key facts about the USA:

Australians moving to the USA: What to know

One of our longest standing political and military allies and a global economic anchor, the United States is a crucial partner of Australia in a number of spheres. Their sophisticated economy, massive international political profile and close cultural ties with Australia means that the United States is one of the key international destinations for Australians looking to resettle overseas for personal or business reasons. If you’re looking for the premier market for your next venture or simply want to enjoy the superior luxury that life in the most developed country in the world can offer, consider the United States.

The United States has one of the world’s most complicated immigration systems. With nearly 200 visa classifications, simply determining which to apply for can be a difficult initial step to take.

Broadly, US visas are divided into immigrant and non-immigrant visas, which are roughly equivalent to permanent and temporary residency visas in Australia. As with Australia, immigrants in the United States can move from certain initial non-immigrant visa – referred to as ‘dual intent visas’ – to an immigrant visa at a later point should they satisfy the requirements of both.

If you’re considering your move to the United States, consider investigating the following visas:

• H1-B visa: The H-1B visa is one of the most commonly sought visas, allowing visa holders to live and work for an initial period of three years, extendable to six. Visa holders must hold a tertiary qualification and be sponsored by an employer in the United States, but no requirement is made that the visa holder remain in that job for the duration of stay, only that they be continually sponsored by an employer. The H-1B visa is one of the few non-immigrant visas offering a clear path to permanent residency and ultimately citizenship, allowing holders to apply for an immigration visa while retaining their H-1B visa.

• E-3 visa: A unique visa offered only to citizens of Australia, the E-3 visa offers faster processing and access larger annual pool of visas with enhanced privileges. Valid for two years and renewable indefinitely, it’s an excellent choice for any Australian looking to live and work in the United States. As with the H-1B visa, applicants must hold a tertiary qualification and be sponsored by a US employer. The path to permanent residency from an E-3 visa is unclear – while dual intent does not apply to E-3 visa, the United States Citizenship and Immigration Services and the State Department have stated that applications for this visa cannot be denied solely on the basis of a pending or approved immigrant visa application, leaving the door open in some cases.

• L-1 visa: The L-1 visa is available to employees of an international company with offices in the United States. This includes overseas companies in the process of establishing an office in the United States. For Australians, this visa is valid for an initial period of five years, extendable to seven. Dual intent is permitted for L-1 visa holders, allowing them to pursue permanent residency while still maintaining their L-1 visa.

There are a broad number of immigrant visas issued under a wide range of types and subtypes, but for our purposes we will focus on the Employment-Based Immigrants type.

This type includes 5 subtypes and more than 60 individual classes of immigration visa. As the entire Employ-Based Immigration visa regime is outside the scope of this article to cover, we will instead provide a general overview.

The requirements for the visas covered under each preference vary greatly and often refer to the nature of the individual’s specific employment or relationship to an employed person. As a general rule, all visa applicants under this category must be sponsored by an employer who is required to obtain a labour certification approval from the United States Department of Labor. Applicants under the Second, Third, Fourth and Fifth Preferences must have an Immigrant Petition for Alien Worker filed for them by their employer, while applicants under the First Preference may make their own petition.

The United States has arguably the most developed, intricate and influential banking system in the world, even more so than the nations of Europe. Banks offer a wide range of services including retail, commercial and private banking to suit individuals with portfolios of all sizes.

Instead of being regulated by a single bank regulator, banks in the United States are regulated by a range of bodies at the state and federal level, with individual cities and municipalities also enacting their own financial regulation laws. This means that available services, bank fees, interest rates and other key factors could be significantly influenced by regulations local only to your specific state or city.

As with many countries with well-developed financial infrastructure, Australian visitors can expect to see familiar Australian-owned banks in some large cities. National Australia Bank, the Commonwealth Bank of Australia and ANZ all have presences in the United States, but we always advise that for ease of access to their funds, immigrants from Australia move their funds to a local bank. The five largest banks in the United States by market capitalisation are:

Cashless payments are common and widely used in the United States. Nearly 65% of Americans said they did not feel the need to carry cash to make a payment in the last month. While the most frequently used of any payment method, cash only accounted for 31 per cent of consumer transactions, indicating a highly diverse market. Especially in large cities, expect to use card over cash at a rate comparable to Australia.

The 1944 Bretton Woods agreement kickstarted the USD into its current position. At Bretton Woods, the world’s most developed countries agreed to value the dollar at $35 per ounce of gold and committed to pegging their respective currencies to the USD. But by the 1970s rampant inflation in America created a situation where the US dollar was worth less than the gold reserves used to back it. In 1971 President Nixon ended the direct convertibility of the USD to gold. Known as the ‘Nixon Shock’, this marked the dollar’s transition from the gold standard to a fiat currency, or a currency not backed by any physical asset.

Several countries besides the United States use the USD as their official currency, including Ecuador, El Salvador, Zimbabwe, Timor-Leste, Micronesia, Palau, and the Marshall Islands. The USD is also used in all US territories, such as Puerto Rico and Guam, and a couple of British territories in the Caribbean. On top of this there are plenty of countries that regularly use the USD alongside their own local currencies. Another 89 nations keep their currency in a tight trading range relative to the US dollar. Taken together, more than one-third of the world’s GDP comes from countries that peg their currencies to the USD.

The USD dominates the world’s foreign exchange markets and is involved in over ninety percent of all forex transactions.

The tax system of the United States is multi-faceted and administered by all levels of government. Federal, state and local governments all have the power to impose a range of taxes on income, payroll, capital gains, sales, estate and other sources, meaning that your taxation level could vary significantly from someone at a similar salary in a neighbouring city.

At a basic level, federal marginal tax rates in the United States are calculated based on earnings and household structure. The Internal Revenue Service identifies taxpayers with one of four filing statuses:

The marginal tax rates for each filing status for 2018 are below:

Additionally, employees of a business will have to contribute towards the Federal Insurance Contributions Act tax. This is in effect two taxes – a 6.2% tax on income to support Social Security up to a limit of $127,200 gross compensation, and a 1.45% tax on income with no limit. These contributions are matched by the employer.

Furthermore, many state governments levy their own income taxes in addition to the previously mentioned federal taxes. Of the 43 states that levy a personal income tax, the tax rates ranges from a high of 13.3% on Californian residents earning over $1 million per year to a low of 1.1% on North Dakota residents earning below $38,700 per year.

As such, Australian residents used to a single, unified tax system are advised to retain the services of a good accountant.

On average, the cost of living in Australia is 9% higher than in the United States, but this obfuscates the sheer unevenness in pricing of things such as rent, education, automobiles and essential goods across the 50 states.

All numbers provided below use Sydney as the Australian benchmark for illustrative purposes.

New York and Buffalo are two cities in the state of New York, separated by less than 500 kilometres distance. In New York, Australians can expect to experience consumer prices including rent nearly 45% higher than back home, while just 90-minutes away by air in Buffalo, the same person will experience consumer prices including rent that are 25% lower.

The extreme difference holds even between the largest cities. Consumer prices including rent in Chicago are only two-thirds of what you’d experience in New York, despite both being in the top three largest cities by population in the country.

Your standard of living will largely depend on which city you can find a job in, meaning that close study of each city’s average lifestyle will be required to ensure your first steps into the United States are a success.

What Influences the AUD/USD exchange rate? 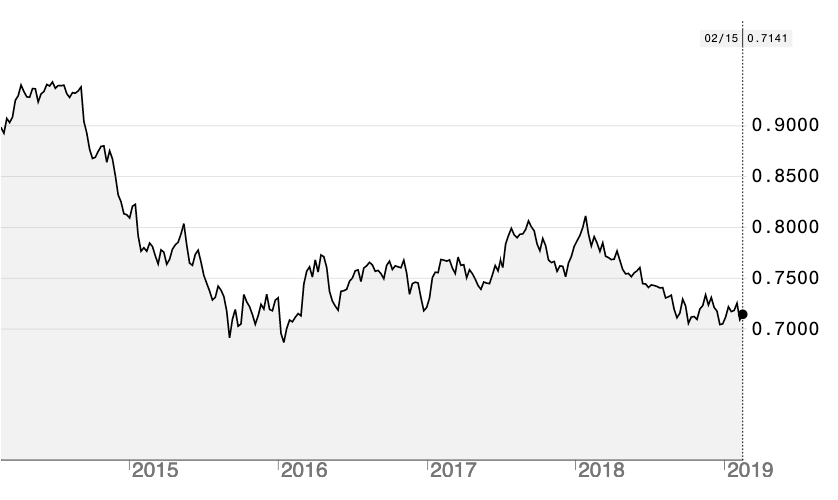 Monetary policy in the United States is controlled by the Federal Reserve. The Federal Open Market Committee (FOMC) sets US monetary policy in accordance with its mandate from Congress: to promote maximum employment and stable prices.

The Fed uses the federal funds interest rate to pursue these twin goals. The fed funds rate is the interest rate banks charge each other to lend Federal Reserve funds overnight. The FOMC sets a target for the fed funds rate at each meeting and attempts to hit the target by buying or selling government securities in what is known as “open market operations”. The federal funds rate, while somewhat obscure, is important because movements in the rate influence other interest rates in the economy, for example home loan rates, car loan rates, prime rates, credit card rates, etc. Through the fed funds rate the Federal Reserve can attempt to control U.S. economic growth.

For example, market sentiment was a key contributor to the USD’s rise between 2011 and 2016. There were a number of key reasons behind the rise of the US currency over this period: 1) investors’ worry about the Greek debt crisis weakened demand for the euro, the world’s second global reserve currency 2) the uneven economic global recovery after the 2008 global financial crisis and 3) fears of slowing growth in China as a result of failed economic reforms. Recall that the US dollar is viewed as a ‘safe-haven’ during any global crisis, so periods of political or economic uncertainty typically are accompanied by bouts of USD strength.

Traditionally, one of the biggest drivers of the AUD/USD exchange rate has been interest rate differentials between the US Federal Reserve and the Reserve Bank of Australia (RBA). Higher interest rates in Australia during the Global Financial Crisis (GFC) attracted traders to the AUD since they could earn more interest than other currencies with near-zero interest rates.

Other factors that could influence the rate to send money from Australia to the United States include overall levels of global commodity prices, China and its economic growth outlook and geopolitical developments like trade wars, Brexit or US elections.