Moving to India: The Essential Guide • Despite being known as a global exporter of products and services, India had a trade deficit of more than US$108.5 billion in 2017

Australians moving to India: What to know

While China is seen as our key neighbour to the North, it would be irresponsible of Australian investors and entrepreneurs to neglect India. A nation of increasing international importance, India is home to dynamic millennia-old cultures, a booming economy and an exploding population that’s on track to make it the world’s largest country by 2024. Whether you’re looking for an expanding economy in which to launch your newest venture or are after a dramatic change of scenery for you and your family, there’s no more exciting choice than India.

India’s immigration system is complex, recognising more nearly 20 visa types suitable for purposes as diverse as missionary work, entrepreneurship, medical treatment and commercial film or TV work. While it is worth familiarising yourself with the full range of visas available, this guide will focus on the most commonly sought long-term visa types with the greatest utility.

• Employment – Employment visas are granted to foreigners working in India in a long-term paid or volunteer capacity. They are granted for a period of one year and are renewable while in India. To apply, applicants must provide proof of employment with a company or organisation in India, such as a contract stating the terms of their employment. A salary floor of ₹1,625,000 (or roughly AU$32,000) was lowered to enable foreigners to teach in certain higher education institutions. Similar exceptions exist for volunteers, cooks, translators and diplomatic staff.

• Business – Business visas are granted to individuals looking to start a business venture or explore business opportunities in India. Applicants must prove that they are of assured financial standing and be able to demonstrate through documents a legitimate reason for being in India, such as establishing a venture, purchasing or selling industrial/commercial products, recruiting manpower, serving as directors of a company or conducting meetings for ongoing projects. Valid for an initial period of 5 years and extendable to 10. Note that most Business visa holders cannot stay in India for more than 180 days at a time without registering with the Foreigners Regional Registration Office (FRRO).

• Entry (X) visa – While previously issued to volunteers, the Entry (X) visa is now most commonly to foreigners where they are the spouse or dependent of someone on a long-term visa such as the Business or Employment visa. Holders of an Entry (X) visa are not allowed to work. The visa is issued for a maximum period of five years, with extension provided at the discretion of the Ministry of Home Affairs.

Within these two categories exist a broad range of retail, commercial and private banks. The market is dominated by 21 nationalised banks – with an additional seven serving as associate banks of the State Bank of India. The five largest banks in India by total income are the State Bank of India, HDFC Bank, ICICI Bank, Axis Bank and Punjab National Bank, all of which offer retail, commercial and private banking services. Additionally, familiar Australian banks such as ANZ, NAV and Westpac can be found in India, but our advice is always for expats to move their funds to a local bank to ensure ease of access.

Cash is still a vital part of the Indian economy. Penetration rates of electronic payment systems are low, with 90% of merchants reporting that prior to the 2016 demonetisation (detailed in Monetary Policy) that they did not have an electronic POS to accept card-based payments. Demonetisation has reduced the economy’s appetite for cash, but it has not eliminated it. The Reserve Bank of India is predicting that circulated cash as a share of GDP is likely to return to its pre-demonetisation levels, but it has restarted discussion around alternative methods of payment.

This is all to say that any Australians moving to India looking to use their card as much as they do back home will be disappointed. Be prepared to deal a lot more in cash.

Although the history of the Indian currency traces back to 6th century BC, the modern-day Indian Rupee (INR, symbol ₹) did not come into existence until 1947, when India gained independence from Great Britain.

Since Independence, the country has faced two major financial crises which caused the government to devalue the Rupee against the USD. The first devaluation occurred in 1966 when rampant inflation and a war with Pakistan saw the US and other countries withdraw foreign aid to India. The second occurred in 1991, when the Indian government was close to defaulting on its sovereign debt and the country’s foreign exchange reserves had dried up.

Although India’s central bank proclaims the INR to be a ‘market-determined exchange rate’, this is not an entirely accurate characterisation. For reasons we will go into more below, the Reserve Bank of India (RBI) operates a ‘managed float’ exchange rate regime that allows it to regularly intervene in the foreign exchange market to smooth INR volatility.

Income tax in India is the domain of the central government. The tax system in India is complicated, with rates for personal income tax varying not just on an individual’s income and residency status, but their age. For financial year 2018-2019 (assessment year 2019-2020), the rates are as follows:

The ‘cess’ mentioned above is an additional levy collected on top of normal income tax. It is calculated on the amount of tax payable inclusive of the above surcharge, not the total tax income – i.e. after your tax payable is calculated, you will be presented with a tax bill for 104% of the calculated amount.

Non-resident individuals – those in India for 182 or fewer days of a financial year – are subject to different rates of taxation, but as this article focuses on emigres these will not be detailed.

The cost of living in India is low. Mumbai – India’s most expensive city – has consumer prices, rent prices, restaurant prices and groceries prices lower than all Australian state and territory capitals – often by a margin of more than 65%. Some costs in Mumbai – such as kindergarten – can be as little as 5% of the cost of the equivalent service in Melbourne or Sydney, meaning that expats able to secure a high-paying job in India will be able to enjoy a significantly higher standard of living on the same salary.

What influences the AUD/INR exchange rate? 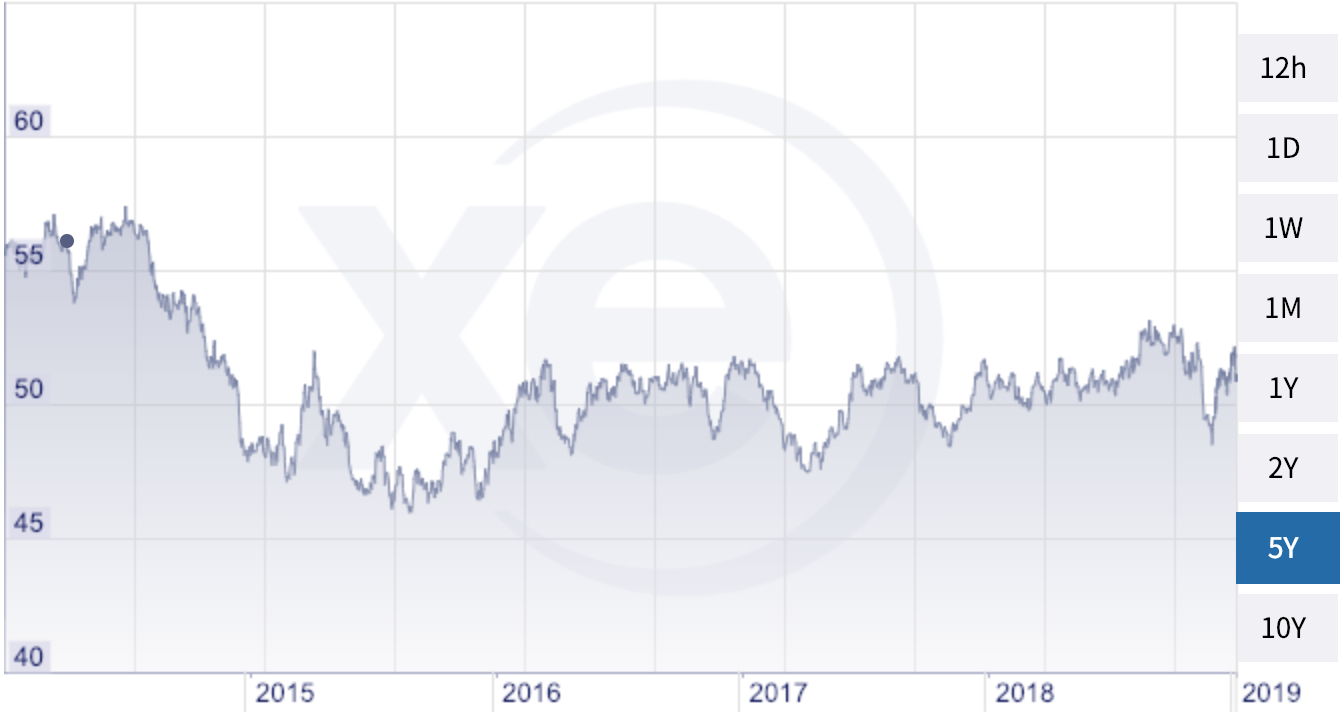 The Reserve Bank of India’s (RBI) approach to monetary policy is aimed at targeting inflation. This is largely because India has a huge unmonetized and agricultural-based economy where slightly more than half of the work force is involved in farming, although the service sectors are the major sources of economic growth. Because the poor are often the first hit when there is a rise in a country’s inflation rate, the RBI’s foremost concern is keeping prices under control.

The RBI does not set its own inflation target. Rather, this is done by the Indian government and the RBI is answerable to them on their performance of meeting that inflation goal. While in practice the RBI is given operational freedom in the means they choose to attain the price target (interest rates, open market operations, liquidity adjustment facilities, etc), this relationship has been a historical point of contention. A recent example was in 2016 when President Narendra Modi’s government announced the removal of the country’s two most valuable banknotes – 500 and 1000 rupees – from circulation. Such a blatant move by the government to influence the country’s money supply, a task usually left for the central bank, called into question not just the RBI’s autonomy but also its competence.

The RBI can (and does) regularly intervene in the foreign exchange market to prevent excessive volatility in the INR. This ‘managed float’ policy applies only to the rupee’s level against the USD, which means that the RBI can buy or sell currency reserves in the forex market to should the USD/INR exchange rate become too unstable. Taken together with movements in the India’s interest rates, the RBI’s actions could lead investors to favour rupees relative to other currencies. This relationship also makes the INR more sensitive than other currencies to the overall level of the US dollar.

Although the RBI’s ‘managed float’ exchange rate policy makes the INR more sensitive than true ‘market-determined’ currencies to the overall level of the US Dollar, final demand for the rupee is still overwhelmingly influenced by what financial markets perceive as the overall health of the Indian economy. Factors that affect the economy include imports and exports, inflation, employment, growth rate, trade deficits, performance of equity markets, foreign investment inflows, commodity prices and geopolitical conditions.

For example, rising global crude oil prices have a negative effect on the rupee because they strain India’s finances. India imports about 80 percent of its petroleum needs, a factor only complicated by the country’s high domestic taxes on fuel – almost 100 percent on gasoline and 60 percent to 70 percent on diesel. Rising fuel prices mean that India needs to spend more of its foreign currency exchange reserves to meet its domestic energy needs. The depletion of reserves means that the government has less money to spend on infrastructure, national defence or foreign debt obligations – which are all net negative for the Indian economy. The rupee, as a result, is likely to depreciate as the market anticipates a worsening balance-of-payments situation.

India and Australia are both large commodity trading nations. The value of the AUD/INR exchange rate, then, is more responsive to sudden swings in global commodity prices than other countries. As mentioned above, India’s reliance on the import of crude oil makes the INR more susceptible to weakness if oil prices were to rise, whereas the Australian dollar would be expected to gain if iron ore, its chief commodity export, were to gain in value.

The USD is the most popular currency to trade against both the Australian Dollar and the India Rupee, making the AUD/INR rate sensitive to changes in demand for the USD. This is particularly true given India’s exchange rate policy assesses rupee volatility in the context of broader movements in the US dollar.

There has never been an instance where the Indian rupee has been stronger than the Australian dollar. The AUD/INR rate has remained fairly stable from 2015-2018, fluctuating between a low of 40.93 and 57.38.